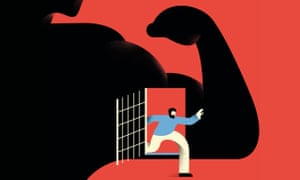 No surprise that this is coming from the Guardian, nor that Mozilla is pushing it, just as all other left-leaning tech companies are showing their social justice skid marks…

Yes, the article is a predictable menstruation of leftist/feminist anti-male drivel, using an absurd, rolling anecdotal case-study of one guy to help make the words masculine and rape synonymous, and advocate warping kids as young as possible – boys into estrogen-filled wet noodles, and girls into even more paranoid self-pedestalizing harpies than they already are – you know, just the daily business at the Guardian.

On the other hand, there was one little part of the article that caught my attention…it was so short, you blink and you’d miss it…

Karen BK Chan, a sex and emotional literacy educator, speaks compellingly of the need to teach boys resiliency in the face of sexual rejection. “How might we empathize with a young guy who is balancing masculinity pressures and the desire to show and receive love?” she encourages us to ask. “How can we help him experience bearable rejection instead of unbearable failure?”

Try not to get hung up on the absurdity of a title like “sex and emotional literacy educator” (I probably have at least as much right to that title as she does…wait, that’s being generous – click on that link to see exactly the kind of person who should not be teaching boys to be men); instead, focus on the question at hand: how can young guys be helped to experience bearable rejection instead of unbearable failure?

First of all, it’s a nice thought, sparing boys the sting of rejection at the age when it can do the most damage, but it’s not like any modernized female – much less a feminist Guardianista – is going to want to bestow an unattractive male anything but the maximum damage from rejection.  For modernized females, that’s the fun of rejecting, and we see them do it without mercy or remorse.  Now of course, I didn’t miss the point – we know that the intent of proposing that we teach boys resiliency is not at all for the boys’ sake, but for females’ sake, because it comes from the gynocentricism-driven #MeToo narrative that the more painful the rejection is for the male, the more likely he is to go on some kind of Republican rape spree or something.  We have Elliot Rodger to thank for reinforcing that narrative, by the way.

What else is funny is the concept of boys “balancing masculinity pressures and the desire to show and receive love”…as if it weren’t common sense that social pressure on a boy that age is to score with females, while his loving desires push him to the same end.  Leave it to a butch-dyke “emotional literacy educator” to be confounded by the conundrum of balancing two weights that are on the same side of the scale.  There is no confusion in a normal, non-feminized boy’s mind about what he wants with girls, but the real opposing force to that is being made ever stronger by pretty much everything else in the article.  Feminism wants to impede sub-prime males’ access to females as much as possible, which is the obvious part, but it goes much deeper – feminists want to corner these males, giving them no way out, and continually squeeze them until they burst.  Why?  What’s the point of that?  It only makes sense if you know that feminism, simply put, is hatred of men.

Well…except for the “hawt” ones, that is.

But I can’t just leave this off without addressing the question that we might actually want an answer to: how do you mitigate the absurdly high level of damage to a young male when hit with a rejection bomb, especially for the first time?  Well, in addition to some uncommon sense things, like not feeding him stories in childhood with Walt Disney happy endings, conventional trad-con thinkers (and these feminists in particular) would be aghast to realize that it is in fact the very thing they hate: the red-pill, and MGTOW.  Learning about female nature, and knocking females off that pedestal (which feminists pretend they hate) is the only way to save young guys from life-altering (and in some cases, life-ending) trauma from the unbridled sociopathy of girls at school.  Well, I should say that this the case only for the young guy who is already on his way to Omegaville, realizing his rock-bottom sexual market value, and having the feeling (and perhaps even conviction) that his first big rejection is also his last.  If he were red-pilled before that happened, he might avoid the dreaded oneitis – that mental illness which manifests itself as a completely inappropriate emotional, romantic and sometimes even a spiritual commitment to a girl whom he barely knows, doesn’t care and was just teasing his dick.  As for the bad boys, the jocks and the other varieties of guys who get girls easily, it’s not a lesson they have to learn – they know that delicious females are a dime a dozen, and his next dessert is right around the corner.  Ironically, this is the lurking sex offender that the females in this article are so scared of…

…Oh wait, I forgot – what constitutes sexual assault is entirely in the opinion of the female, so bad boy is off the hook yet again.  Hey, let’s find a way to sniff out which unattractive guys have oneitis for someone, and then we’ll name & shame them to suicide!

20 thoughts on ““Redefining Masculinity” and Rejection”